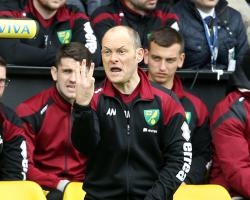 With just three matches left, the Canaries are 19th, yet only two points behind 17th-placed-Newcastle, who have played a match more.

Norwich kick off the weekend's Barclays Premier League action on Saturday lunchtime, so could leave their rivals playing catch-up, with Sunderland at home to Chelsea while Newcastle travel to relegated Aston Villa.

Another home game against Watford comes next week, and Neil accepts the club are now entering a make-or-break period.

"Any time you are going into big game it becomes your biggest game, anything you have done in your past no-one really cares about any more, it doesn't become important," said Neil, who took Norwich up via the 2015 Sky Bet Championship Play-off final at Wembley

"So this is certainly the biggest game of our lives at the moment because it is the most relevant for us and is going to shape the future for us going forward."

"What it does do is apply pressure to their game, but there will be pressure on that anyway

They will recognise and we recognise that all the teams need to win games to stay in the division.

"There is only two (left) for Newcastle, three for us and Sunderland so we know this is a crunch match for us and we need to try to apply pressure back on the other teams now."

Neil impressed as the former Hamilton player/manager masterminded a promotion charge last season, having been parachuted in during January 2015.

"For me it is not about money, it is about pride, fighting for your club to retain your status - everything other than money really

It is about your career and how you want to see yourself."

Neil added: "It is about getting the players focused, and gaining belief, and getting them to believe, to go out with a real purpose, that is the key ingredient

"I remember going into the play-offs last year and I didn't have even half a percent of doubt we were going to win through...

"With the finance which is coming in next season, it will make the divide bigger between the Championship in the Premier League," he said

"We need to try to consolidate, to try to push forward and become a team who is not flirting with relegation, a more stable Premier League team, but that will only happen if we stay up

"It would be more relief than celebration, the fact that we have done it and we know how significant it is for the club to grow and become better and better."