Alex Neil optimistic Dieumerci Mbokani will excel for Norwich in 2016 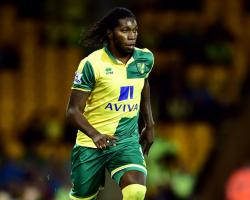 Mbokani was among four changes to Neil's team, having replaced the established Cameron Jerome, and after being a consistent physical threat to Villa's struggling defence, he headed their second goal in the 87th minute.

Neil also revealed he expects to strengthen his squad in the January transfer window, and it is perhaps only a consistent goalscorer he requires to lead his team to survival, but asked of Mbokani's strong performance, he replied: "He's capable of doing that.

"He's been a bit unfortunate, the fact that he's played some difficult matches

But he's more than capable of being a real handful for us, and I thought it was the perfect game for him.

"He came in and did more than I could ask for, so I'm really, really chuffed for him.

"He'll be a real force for us in the second half of the season, he's got three goals for us in six starts, which is a really good return, and if he continues to play like he did, he'll do fine.

"I still think we need to strengthen the squad, we need to help the squad as much as we can

If we can strengthen in certain areas, it'll give us the best chance in the second half of the season.

"We'll certainly be active in the window, and hopefully successful."

They are yet to win since Remi Garde's appointment at the start of November - their last league victory came at Bournemouth on the opening day of the season - and the manager knows their plight could prevent him attracting the signings he requires.

"Of course, we are not the most attractive club at the moment in the Premier League," he said.

"But I've got some ideas, and players, who hopefully could still believe that we can improve, and I can tell you that Aston Villa is still an attractive club for some players.

I'm still believing that we can still win

Of course, you can imagine how disappointed everybody is in the dressing room, but then we are all together and will stay all together to try to win the next one.

"I can tell you that the players after the game were really disappointed, especially because the last two games gave us some hope over what we can do.

"(At Norwich) we didn't (win), but we have to cope with that

We're still working, we have nothing else to do."