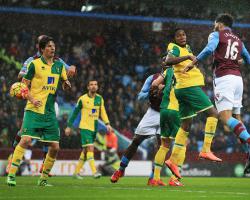 They slipped into the Barclays Premier League relegation zone after a 2-0 loss at Villa Park on Saturday.

Goals from Joleon Lescott and Gabby Agbonlahor condemned the Canaries to their sixth straight defeat in all competitions and they have shipped 19 goals during that run.

"Not until we were 2-0 down," he said, when asked if Norwich showed enough character.

"If you watch the Premier League they shouldn't need building up

That's motivation in itself

Nobody wants to feel the pain of relegation

I've got two promotions back-to-back and the last thing I want to do is go back.

You want to fight, you need the players to do that

They have to show that passion.

If you are that fragile and your confidence is hurt because you've lost a couple of games you're in the wrong game."

Newcastle's 1-0 win over West Brom ensured the Canaries fell into the bottom three while Villa remained at the foot, despite victory.

They are eight points from safety following their third league win of the season as Agbonlahor ended his 11-month goal drought.

He had not scored since March 2015 but sealed the game in the second half after Lescott's header just before the break.

Boss Remi Garde has admitted he had a disagreement with Agbonlahor earlier in the season, with the striker struggling for fitness and form, but was pleased with his performance.

He said: "Scoring was very important for him because when you are a striker and not scoring for a long time it's very painful," he said.

But it's not only about Gabby, it's about all the players around him.

"I'm pleased he is back on track."