Alex Neil to ponder Norwich future at end of the season 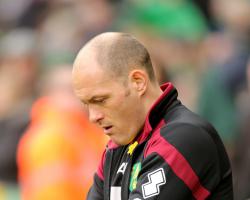 David McNally announced his resignation following the Canaries' loss to Manchester United on Saturday, which left the team four points adrift of safety with two games left to play.

Norwich play Watford on Wednesday, with the future of Hornets head coach Quique Sanchez Flores increasingly uncertain, but Neil's side will be relegated regardless if Sunderland beat Everton.

"Recruitment is a part of that, a whole load of things needs analysing.

We spoke about Quique Flores earlier on.

That's normal in the Premier League."

Asked he still wants to be at Norwich, Neil said: "Of course, this is a club I've been given the task to help.

"Unfortunately we're not in the position I'd like us to be but we need to crack on and see where it takes us."

Norwich chairman Ed Balls told the BBC on Tuesday that the manager has the "100 per cent" support of the board and Neil said he does not fear the sack.

"If you become scared of that, it undermines your position and I think players, fans and people get that sense from you.

"That shows weakness and when you're in a position of power that can never come across."

McNally was a key figure in appointing Neil as manager in January 2015 and had been at the club since 2009, when the Canaries were languishing in League One.

"I'm disappointed he left the club, I had a real good relationship with David," Neil said.

"He showed trust and faith in me, he helped bring me to the club

I think we've lost a really important figure for us."

Norwich will be without Jonny Howson against Watford

The midfielder came off against Manchester United with a knee injury and scans suggest he will be out for six to eight weeks.

Ryan Bennett, however, has recovered from a bout of illness and is available.

"If we can take it to the last game the amount of pressure on that one over 90 minutes, anything can happen," Neil said.

"It doesn't look good, the odds are stacked against us, but if it comes down to one match, anything can happen.

"For that to happen we need to win tomorrow night and hope we get a bit of luck."