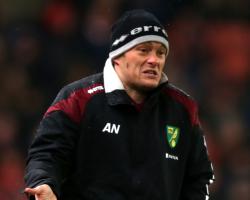 Neil's side have slumped into the drop zone following a run of just one point and eight defeats from the past nine matches.

However, while Neil insists the results do not tell the whole story, he has urged his troops to deliver in Saturday's lunchtime kick-off against City

"We played really well against the top teams this season, drawing with Everton here (at home) and also Arsenal," said Neil.

"We beat Manchester United away and in both games against Chelsea, we played pretty well - even Manchester City away we put in a good performance in the league, so it is not out of our capabilities.

"It is now about making sure that when you put good performances in you have to turn them into wins, but if you keep doing the right things and perform in a good manner, work as hard as you can, then you hope the results will come

"Three out of the last four performances have been very good, probably better than when we had that decent run earlier in the season, we just need the outcome to be a win which will give the players the boost going into the run-in

"We are all really determined to get something from the game, we have done it against some of the other big teams so there is absolutely no reason why we can't do it tomorrow

"We have been in the games, we just need to make sure we turn performances into results

I know that is easier said than done, I certainly don't want to be a valiant loser, so we have to make sure we attack this game tomorrow."

Norwich are a point adrift of Sunderland and ahead of Newcastle on goal difference, with key fixtures against both those sides at home still to come

Neil added: " If we can only take one point from the last nine games and still only be a point in it (from safety), then I will take that as a big positive because I am hoping we cannot have another set of nine games like that."