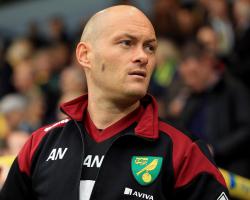 Saturday's 1-0 Barclays Premier League defeat by West Brom was the club's third in succession, in a run of conceding nine goals in three games, and Neil plans to experiment with his starting XI in his attempts to improve the Canaries' disappointing recent form.

Striker Dieumerci Mbokani remains a doubt, owing to illness, but midfielder Youssouf Mulumbu is among those expected to return.

"I don't think it will be wholesale changes," said Neil, 34

"There'll be a few

I'll give guys an opportunity who have trained well and deserve a chance.

"You have to make sure the guys are not thrown together, you have to give them an opportunity

That is not a secret and the squad are fully aware of that.

"Results haven't been as good as we would expect so some of the other lads will get an opportunity and we'll see what happens from there.

"Dieumerci Mbokani has picked up a little bug, flu-type thing, so he has to shake that off but other than that the rest of the squad is fine

Potentially that could rule him out but we'll see how he recovers from it.

"(Youssouf Mulumbu) comes into my thoughts for Everton, along with the rest of the first-team squad

There are guys we need to get minutes because they might be required.

"The league is our bread and butter

That is the most important thing for us this year

We want to do well in the cup but if you are prioritising then the league is most important.

We'll give it our all but I need to balance it off to make sure we are fresh.

The lads not playing are just as important to me as the ones who are because you never know in a week or two they might be the ones called upon, so it is crucial."