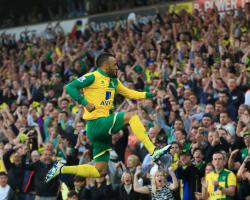 The Canaries ended a four-match scoreless run with goals from Redmond, Dieumerci Mbokani - who scored twice - and a Craig Cathcart own goal.

But it was too little, too late

Sunderland's victory over Everton rendered the Canaries' ninth win of the season - and third in 17 games - irrelevant as Alex Neil's side joined Newcastle and Aston Villa in being demoted.

Watford scored early goals in either half, with Troy Deeney and Odion Ighalo on target.

The Hornets and Bournemouth were promoted alongside Norwich last season and they survive. Norwich are down.

Norwich fans sang in support of manager Alex Neil, who has the board's backing, while Quique Sanchez Flores' future at Watford remains uncertain amid reports he will be replaced.

David McNally resigned as Norwich chief executive after last Saturday's loss to Manchester United, with some blaming City's plight on a lack of strengthening following their success in the Championship play-offs 12 months ago.

But individual errors have punctuated Norwich's season and there was another as Deeney put the visitors ahead.

Deeney met a long ball forward, nodding down for Ighalo

The lead lasted four minutes as Redmond set about showing he is top-flight class.

The winger played a one-two with Steven Naismith and drilled the ball through Heurelho Gomes' legs.

Having ended a 375-minute wait for a Norwich goal, another followed three minutes later when Redmond cut inside on the left and shot across goal

The ball rebounded off the post for Mbokani to tuck in.

Next Redmond fired wide from the edge of the area and soon after he jinked inside and prodded the ball against the post.

Martin Olsson had scored Norwich's most recent goal prior to kick-off - with a stoppage-time winner in a 3-2 defeat of Newcastle on April 2 - and had a long-range effort which Gomes saved at full stretch.

Wes Hoolahan, who was a fine second foil to Redmond, tried repeatedly to craft a third and did so after 37 minutes.

Allan Nyom slipped attempting to intercept Redmond's ball to Hoolahan, who crossed and Cathcart diverted the ball into his own net.

Norwich supporters were jubilant, but no sooner had they dared to dream of the great escape than news filtered through that Sunderland had scored.

The Norwich players were made aware of their predicament, too, when Watford's fans sang of the score at the Stadium of Light.

They continued to push forwards and Naismith and Hoolahan were denied by Gomes before Norwich were applauded off at half-time.

Watford pulled a goal back when Deeney crossed and Ighalo side-footed in, to end a 12-match scoreless run in the Premier League.

News of Sunderland taking a 3-0 lead followed, before Norwich's fourth.

Redmond and Mbokani combined and the striker stayed onside before lifting the ball over Gomes.

"Ipswich Town, we're coming for you" sang the Norwich faithful, trying to take the positives.

The night threatened to end as it had begun

But there was to be no recovery for Norwich.