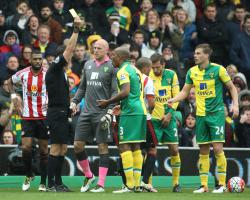 Here, Press Association Sport takes a look at five key games which sent the Canaries back to the Sky Bet Championship after just one season.

After successive victories over Newcastle and West Brom before losing at Crystal Palace, the Canaries still had their top-flight fate in their own hands when relegation rivals Sunderland came to Carrow Road

The visitors could have left trailing by seven points, but after an early melee which would later see both clubs fined by the Football Association, the hosts produced a toothless display

As a result, the gap was down to just one point - with Sunderland now upwardly mobile and Norwich staring at the abyss

Not for the first time this season, the Canaries blew a lead against West Ham

Robbie Brady and Wes Hoolahan made it 2-0 early in the second half, but Norwich's defensive frailties were again exposed by the trickery of Hammers substitute Victor Moses, who helped set up Dimitri Payet in the 74th minute before captain Mark Noble crashed in a swift equaliser as Norwich threw another priceless two points away

Having been thumped 6-2 away to a poor Newcastle side back in October, it was perhaps no surprise that Norwich failed to make the most of their trip to Villa Park, which has proved such a happy hunting ground for visiting teams this season

Villa were not yet down, but well on their way out

However, they saw off the Canaries without much fuss through an own goal by Timm Klose just before the break and Gabriel Agbonlahor's well-taken effort early in the second half for what was only a third home league win

After recovering from going behind to Roberto Firmino's strike, Norwich led 3-1 following goals from Dieumerci Mbokani, Steven Naismith - on his debut after signing from Everton - and a penalty by Hoolahan

However, Jordan Henderson immediately cut the deficit, and it was no surprise when Firmino levelled and then James Milner put Liverpool in front again at 4-3 with 15 minutes left

There was, though, late drama as Sebastien Bassong drilled in what looked to be a stoppage-time equaliser, only for Norwich's defence to hit the self-destruct button again when Adam Lallana's scuffed effort sealed victory for the Reds - sparking a mass celebration from players and coaching staff, during which manager Jurgen Klopp lost his glasses as the Carrow Road faithful were left rubbing their eyes in stunned disbelief.

Norwich had started the season with great hope following their victory over Middlesbrough in the Championship play-off final at Wembley, and had lost only twice in their opening eight league games when heading to Upton Park

Brady fired the visitors into an early lead, but Diafra Sakho levelled before half-time

There were just seven minutes left when lively substitute Nathan Redmond netted what should have been the winner - but in a sign of times to come, Norwich's rearguard was breached deep into stoppage time when Cheikhou Kouyate bundled home an equaliser