Four things Norwich need to do to avoid relegation this season 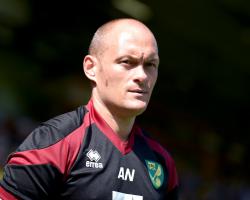 In the last 10 seasons, only 12 of the 30 promoted teams have failed to survive a single year

Twelve finished between 11th and 17th and five immediately reached the top half.

Norwich have struggled in the transfer market since their return to the top flight, managing to bring in just five players on permanent transfers.

The Canaries have already been installed as second favourites to be relegated by the bookies, but can Norwich City beat the odds and stay in the Premier League?

Cameron Jerome was excellent in 2014-15 but has previously failed to translate his Championship record to the Premier League and Bradley Johnson will not score a total of 15 league goals as he did last season.

There appears to be a desperate need for quality striker for Norwich City, Premier League teams are constantly on the hunt for an affordable, high-quality striker

Michu, who signed for Swansea City in 2012 from Rayo Vallecano for just $3 million and scored 22 goals in his first season, is a prime example.

Norwich are set to move Crystal Palace forward Dwight Gayle or Hull's Nikica Jelavic after losing out on Mattia Destro who will likely going to join Bologna.

Norwich need to sign top quality striker who can fill the boots of Chris Sutton.

Norwich have to sign more cover players as their bench is not strong enough, the Canaries have already suffered as Alex Neil Couldn't replace Martin Olsson who is out of action for the last two games.

Norwich have to do the same as the Saints as injures could make the Canaries suffer in middle of the season.

Southampton have signed a lot of cover players as injuries can be unpredictable and clubs need to be able to react to unforeseen circumstances.

Norwich have not improved at defence as the added only right-back Andre Wisdom and backup goalkeeper Jake Kean so far.

Norwich defence remains a concern as they conceded 48 goals last season, the Canaries defence hasn't changed much at all since their Premier League relegation and Alex Neil will have to make his best to sign at least one solid defender.

Norwich entered the race to sign Kalidou Koulibaly from Napoli but they have to hijack the negotiations as the Saints are in an advanced talks to bring Koulibaly to St MaryÃâs.

Norwich must learn from their mistakes in 2013-14

CityÃâs last top flight campaign was a bruising one but many lessons will have been learned along the way.

Chris Hughton couldn't make the right decisions as he bought the likes of Ricky van Wolfswinkel and Leroy Fer who they failed to deliver.

Alex Neil could be a Norwich legend if he could survive from relegation this season but it won't be that easy and his side should be at their best to achieve that.