Gary ONeil sent off as Norwich crumble at Stoke 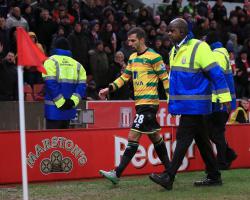 With the score at 0-0, the Canaries were reduced to 10 men in the 31st minute when Gary O'Neil was sent off for an utterly needless slide tackle on Ibrahim Afellay.

After then falling behind to Jonathan Walters' 49th-minute effort, Norwich did well to level six minutes later through a cracking Jonny Howson strike.

But Stoke regained the lead via Joselu's smart finish in the 67th minute, and the away side then shot themselves in the foot again as Ryan Bennett's own-goal 12 minutes from time sealed victory for the hosts.

Norwich remain five points clear of the relegation zone in 15th place, but will be disappointed with their efforts here after registering three wins in their previous four league fixtures.

The Potters, meanwhile, now have three victories from four top-flight games themselves and are up to seventh.

Stoke - with most of the players rested for Saturday's FA Cup game back in their side, but not hamstring injury victim Xherdan Shaqiri - made a positive start to the contest.

Marko Arnautovic brought a decent save out of Declan Rudd having received a fine lofted pass from Joselu, who was then just unable to finish on the stretch as the same Potters pair combined again.

Howson sent Norwich's first real effort into the stand, before both Walters and Joselu put the ball wide from Arnautovic tee-ups.

The home side seemed in control, but they survived a scare when Wes Hoolahan collected the ball direct from a poor Jack Butland kick only to send it wide.

Butland then quickly redeemed himself, pulling off a great diving stop to push away Bennett's strike.

Moments later, Norwich found themselves a man down in baffling circumstances after O'Neil opted to make a lunging tackle from behind on Afellay, despite the ball having already more or less run out of play in front of them down by the dugouts.

The challenge absolutely clattered Afellay and left referee Neil Swarbrick with little option but to produce the red card for O'Neil.

Walters looped a shot over the bar, then Arnautovic completely miss-kicked in a decent position as Stoke looked to make their man advantage count.

And soon after the break it was that duo who fashioned the opener, Arnautovic whipping in a delightful cross that Walters tucked away with the visitors' defence static.

Things looked grim for Norwich, but the 10 men then shocked their hosts with a swift and emphatic response as Vadis Odjidja-Ofoe chested a Hoolahan cross down on the edge of the box and Howson lashed into the corner.

Canaries boss Alex Neil looked eager to seize the moment as he sent Matt Jarvis and Nathan Redmond on not long after, but within only a few minutes of that, Stoke's lead was restored, Sebastien Bassong's attempt at a clearance only coming to Afellay, whose pass was slotted in coolly by Joselu.

Bennett then inadvertently made the points safe for the opposition, nodding Afellay's free-kick past Rudd, who did well late on to deny Stoke substitute Peter Crouch.