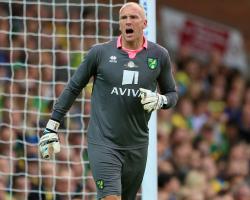 After a fine first season under Ronald Koeman, things have started less smoothly this year for Saints.

Morgan Schneiderlin and Nathaniel Clyne both left in the summer, with speculation that Sadio Mane and Victor Wanyama could follow them, and their flirtation with the Europa League proved a brief one.

They were beaten over two legs by FC Midtjylland in their play-off and while that is a blow to their ambitions it does mean no more of the midweek travels that can disrupt teams in domestic competition.

Norwich will be the last side to catch Saints after a European trip when they visit St Mary's on Sunday, and Ruddy is hopeful of a positive result.

"Whether or not that's Europe getting in the way..

we see that so many times at the start of the season where teams are adapting to playing in Europe and can't quite find a formula to work with the league games.

"It's going to be a very tough game, we went there last time in the Premier League (2013-14) and they were very good last year, but we're geared up for it and we're preparing in the right way and we're looking forward to another test."

Alex Neil's Canaries have had a mixed start to the season with a loss, a win and a draw from their first three matches.

They were held by Stoke last weekend, but could easily have taken all three points were it not for Jack Butland's man-of-the-match display in the Potters goal.

Ruddy is content with how the team have started life back in the top flight and sees a determination among his colleagues to prove they are in their rightful place.

"I feel positive about the fact we've had three good performances, four if you count the (League Cup, beating Rotherham 2-1)," he said

"The performances to a man have been excellent

"We did deserve to down last time (two seasons ago), we weren't good enough over 38 games and the league table doesn't lie, but we all believe individually we are good enough to be in this league

"We bounced back in the best possible way last year and we've acquitted ourselves very well in our first three games.

"There were loads of doubts and people tipping us to go down but I think we've shown we can hold our own and we will surprise a few people this year."