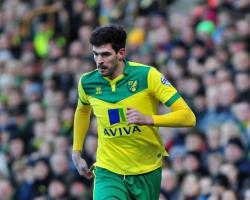 The governing body said in a statement: ''Kyle Lafferty has been fined ÃÂ£23,000 and warned as to his future conduct after he accepted an FA misconduct charge in relation to betting

"The Norwich City forward breached FA Rule E8 in respect of a bet placed on the result, progress, conduct or any other aspect of, or occurrence in, a football match or competition on 20 February 2016."

Lafferty, who fell out of favour at Norwich last season and is expecting to move to another club later this summer, was an unused substitute in their 4-1 victory over Blackburn on Saturday

He made just three appearances for the Canaries last term and after being linked with a move to Leeds among other clubs, joined Birmingham on loan in March

He spent four years at Rangers, scoring 38 goals, and had spells at FC Sion and Palermo before joining Norwich for an undisclosed fee in June 2014