Lewis Grabban reported to have been suspended by Norwich 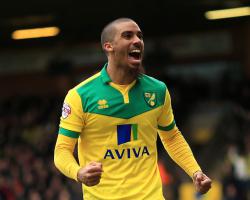 The 27-year-old, who has been the subject of three unsuccessful bids from former club Bournemouth, was not in the matchday 18 at New York Stadium and reports surfaced that the player had left the team hotel and made his own way home after being told he would start on the bench.

The Canaries are now said - by a number of national newspapers - to have acted by suspending Grabban, telling him to stay away from the club, as his exit from Carrow Road appears to be drawing closer.

His walk-out was not confirmed by boss Alex Neil, but he vowed to resolve any issues while refusing to weaken the club's stance on the fee Bournemouth will have to pay for the striker

"I don't have any issues with any player

He might have an issue but I'll quickly fix it," Neil said after the 2-1 win at Rotherham

"There won't be any shedding of light

Any sort of thing that happens behind closed doors stays there and that has always been the case and that will remain the case.

"As far as I am concerned Lewis Grabban is a Norwich player, bottom line, that is it

"We have rejected three bids from Bournemouth and the bids we have received were not anywhere near the valuation of our player.

"Until we get to a stage where the bids are acceptable then Lewis Grabban remains a Norwich player."

The Barclays Premier League club were unavailable for comment when asked by Press Association Sport on Wednesday night.