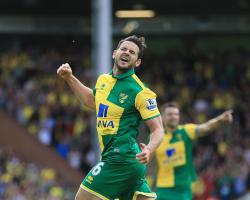 The 29-year-old winger, with one England cap to his name, moved to Carrow Road from West Ham on transfer deadline day.

He has initially signed a season-long loan deal and looked right at home on the Canaries' left-flank, curling home in a comfortable 3-1 win over Bournemouth.

Cameron Jerome had opened the scoring with his first of the campaign having been teed up by Wes Hoolahan - who was still holding his shin-pad having lost it in an earlier challenge.

The Republic of Ireland international was at the heart of everything positive for the home side and he slotted home the second after the break before Jonny Howson played in Jarvis to wrap up the points.

Steve Cook headed home a late consolation for Bournemouth but Jarvis saw enough from his new colleagues to know Alex Neil's side are more than capable of competing in the Premier League having been promoted alongside the Cherries.

"This Norwich team have loads of potential," he said.

"I've only been here a week and a half but I can already see it's a fantastic squad, with a great team who can put in performances like we did today

"Wes was fantastic - he picks up those positions that can hurt you and he was able to do that today, especially in the second half

He drove forwards to create opportunities and he got his goal."

Jarvis, whose last goal came in a 3-1 defeat at Arsenal 17 months ago, left Upton Park after the arrivals of Michail Antonio and Victor Moses all-but sealed his fate as a bit-part player in Slave Bilic's squad.

He was signed by former Hammers boss Sam Allardyce for a reported fee of ÃÂ£10million in 2012 and admitted his emphatic goal celebration was a release having been forced to leave the club.

"It was a little bit of frustration coming out, but I was absolutely delighted to score," he added

"I had a lot of time to think about what to do, but you just have to go with what you think and it was the right decision."

For Bournemouth, the manner of this defeat will be the most worrying factor after they saw off a West Ham side 4-3 in their last away match - a game in which Jarvis came off the bench for the Hammers.

Eddie Howe has seen his side take four points from the first five Premier League games in the club's history but insists he is nowhere near hitting the panic button.

"I don't think there is any reality check needed from my perspective," he said.

I've been really pleased with our performances up to this point and this is our first disappointing game and I think you're going to have that throughout a season.

"The key thing is minimise those disappointing performances and even when you're not playing well try to edge out a result and make sure you pick up points."