Matt Jarvis hopes to get frustration out of his system 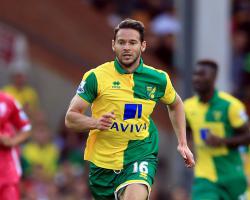 The Canaries were beaten 2-1 at home by Leicester before the international break, which was a first defeat in a promising run of four matches.

Jarvis, on loan from West Ham, admits not having another game to quickly try to put things right has made it a difficult spell for those left at the Norfolk club's training base.

"As a group it wasn't nice to lose before the international break as you have that feeling for two weeks," Jarvis said.

"We have had time to reflect on Leicester and want to put things right now."

Jarvis added: "We want to keep our away record going and have shown in games how well we can play.

"Everyone can see how good the team is, but you have to be consistent too.

"In every match this season we are looking to make a strong start to ensure the other team doesn't pick up momentum, and Sunday is no different."

The 29-year-old, however, is not about to rest on his laurels.

"It has been a good start for me here," he said at a press conference.

"I scored quite a few for Wolves when I was in the Premier League with them, and it is one thing I have needed to improve on.

"I have scored a couple at Norwich already, and hopefully I can keep that up.

"We have got a competitive squad, so I know I need to maintain my form.

"When you are given the chance to play you have got to take it."

Newcastle may be currently propping up the rest of the Premier League, but Canaries boss Alex Neil will not allow any complacency from his squad.

"We want to make sure that we go about our business in the right way and hopefully put a really good performance in," the Scot said on Norwich City TV.

"Out of the 10 games we have played so far (in all competitions), we have done really well in eight.

"That is a great ratio for us, but we will be looking to improve on that as well.

"It is such fine margins by which you win or lose games at this level.

"There have been a couple of games this season where I felt we have deserved to win, but we haven't - and those four or five extra points would put you in a very different scenario."