Matt Jarvis to complete permanent move to Norwich in January 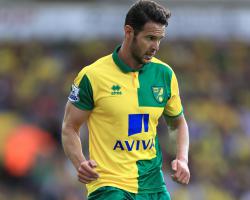 The 29-year-old, who moved to Carrow Road on loan in September, will sign a three-and-a-half-year contract on January 2.

The fee for Jarvis is undisclosed but is reported to be around ÃÂ£2.5million, meaning the Hammers have taken a big loss on a player they signed for a then club-record ÃÂ£10.75million in 2012.

Jarvis has made seven appearances for the Canaries so far and scored two goals, including one on his debut in a 3-1 victory over Bournemouth.

He told the club website: "I've really enjoyed my time here so far, so I'm delighted to sign on the dotted line.

I had a great start here and hopefully I'll be back up-and-running soon for the rest of the season.

"My first game especially was great

To get out in front of the home fans and score in a win was a perfect start which carried on for a while.

"Unfortunately I then picked up an injury but I'm desperate to get back fully-fit, and back playing

To get the deal sorted is really nice and I'm looking forward to helping the team as soon as I can."

Only a few years ago he commanded a transfer fee of over ÃÂ£10million and as a player he has a lot to offer."