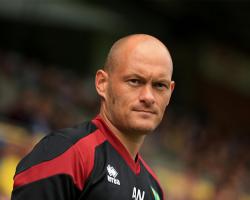 The Canaries lost their first game back in the Barclays Premier League, defeated 3-1 at home by Crystal Palace.

Neil's impact has certainly been remarkable since the rookie Scottish manager took charge in January, guiding the Norfolk club to victory in the Sky Bet Championship final against Middlesbrough at Wembley.

However, the 34-year-old accepts mixing it with the elite clubs of English football is a whole different ball game.

Norwich have been able to bring in some five players during the summer, including Andre Wisdom on loan from Liverpool and Robbie Brady in a ÃÂ£7million deal from Hull

However, the club has also been left frustrated in attempts to land another striker, being linked with Dynamo Kiev's ÃÂ£10million-rated Congo striker Dieumerci Mbokani as well as Destro, who is valued at around ÃÂ£4mllion by Roma

Neil accepts Norwich being an unfashionable club was always likely to prove a difficult hurdle to overcome.

"The problem we are finding at the moment in terms of recruitment is some of the players we are trying to attract don't see us as a good proposition to come and play for," Neil said at a press conference

" Another thing which makes it difficult for us is the valuation, and of British players it is ridiculous how much some of them go for in comparison to foreign players

"However, then the problem with foreign players is they have not done it here, and then you are also taking a gamble there.

"Getting that balance right is going to be a calculated gamble as well, you have to do as much homework as you can.

"We are still chasing top targets, and I won't just sign players who I think will be another number, I need to add to the group, to make us stronger and better, which is why it is probably taking a bit longer to get people in."

Neil confirmed Roma frontman Destro was one of his targets.

He said: "There are ongoing negotiations with quite a few players, not just players but clubs and agent and different things like that, but yes, he is a player who has been discussed."

Neil is hoping for a similar performance to the one against Palace, if with a more positive outcome.

"We want to go there and play as well as we did last weekend, but to make sure the result reflects that," he said.

"We just need to be careful that all the hurt and pain Sunderland are feeling from (their defeat) last week does not manifest itself into a performance."