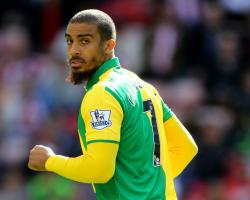 The 27-year-old moved to Carrow Road after a spell with the Cherries and could be in line to feature against another former club Rotherham in the Capital One Cup on Tuesday night.

"Yes, we've had a few bids for Lewis but they have been rejected," Neil said.

"Bournemouth have come in with two separate bids and they have both been rejected.

"Lewis is an important part of the squad

Lewis is a clever boy and he can see how much he has featured under me since I have been here and he is a big part of our plans.

"I certainly won't be giving players to direct rivals

That is the bottom line."

Grabban was an unused substitute in Saturday's draw with Stoke.

"That was purely because of how the game was developing

He will be in the squad for Rotherham," the Canaries boss said.

Neil is in the market for a "forward player", with Crystal Palace's Glenn Murray the latest to be linked after Stoke's Jonathan Walters and Benik Afobe of Wolves.

The Scot is waiting to see how the situation develops and does not expect any departures, despite Gary Hooper being linked with a move, with his former club Celtic among the reported destinations.

"There has been a lot of speculation surrounding Gary in particular," Neil said.

"Sheffield Wednesday has been one, Celtic has been mentioned.

"Until we hear anything concrete then it is just speculation

At the moment I don't expect any departures."

Neil is expected to give his fringe players opportunities in the League Cup clash but still wants to field a competitive side.

"Everybody wants a cup run if you can get one; it's one of those ones where you want to get by without any injuries and put in a decent performance," he said.

"It's a one-off competition, and strange things happen in cups.

"You can't go with that attitude and underestimate the opposition

As we saw last year when we went there it's a tough place to go.

"We have to make sure we're ready and well prepared."