Neil wants everyone to draw a line under Grabban issue 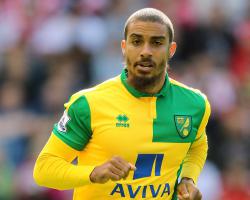 Grabban was reprimanded after he left the squad hotel ahead of the Capital One Cup match at Rotherham last month, the 27-year-old reportedly unhappy at Norwich rejecting three bids from former club Bournemouth.

The player issued a public apology late on Thursday night, declaring his determination to "train hard, let my football do the talking and to do everything I can to help Norwich City do well."

While Grabban - signed from Bournemouth in the summer of 2014, helping the Canaries win promotion via the play-offs - will not feature in the squad for Saturday's Barclays Premier League match against his old club at Carrow Road, Neil hopes everyone can now put the matter behind them.

"Lewis broke the rules and he has been punished

He accepted that he has done wrong and has paid the consequences of that," said Neil.

"At the moment he is training to get his match fitness up, and will continue to pay his dues until he works his way back into the squad, so as far as I am concerned, the matter is pretty much done."

Neil agrees with Cherries boss Eddie Howe there should be no reason for any animosity between the two newly-promoted clubs when they go head to head on Saturday.

He said: "Eddie is the manager of Bournemouth and I am the manager of Norwich, we both will want to go and win the game, but there are certainly no hard feelings between the clubs, football is business."

Norwich brought in Congo forward Dieumerci Mbokani on loan from Dynamo Kiev ahead of the transfer deadline.

"He has looked good in training, is big and strong and offers us something different from what we have got, so I am hoping he will be a useful addition to what we have got," said Neil, who suggested the 29-year-old would probably be among the substitutes.

Norwich forward Kyle Lafferty impressed during the international break, scoring for Northern Ireland as they closed in on qualification for Euro 2016

The 27-year-old, who spent time on loan at Turkish side Rizespor last season, has yet to feature for Norwich this season following recovery from a knee problem.

Neil said: "It is good that he has got minutes under his belt and Kyle is the same as any other player, he trains with the first team squad on a regular basis and puts himself into contention."

Neil defended the decision to offload Norwich's player of the season.

"Bradley was not really getting in the side, but was under no pressure to leave," the 34-year-old Scottish coach said.

"I had a chat with Bradley about it, there was no fall-out as some people might suggest, and I spoke to him once he had left, wished him all the best and thanked him for everything he had done, and we left on good terms."