Neil: We're the only ones to blame 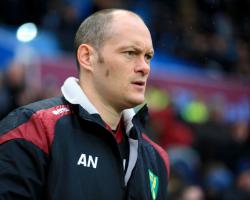 With just one point managed from the last eight league matches, the Norfolk club appear destined for a swift return to the Sky Bet Championship

While Norwich fans can lament some misfortune again on Tuesday night when Diego Costa netted what proved to be a crucial second goal in first-half stoppage time despite being offside, Neil insists his only focus is getting the best from the players over their final 10 matches

"I am a big believer in that you make your own luck. I am not sitting here saying we would not be in this position if were not for the (refereeing) decisions - we are in this position because we have not won enough games, it is as simple as that," said Neil, who confirmed key midfielder Alex Tettey was set for ankle surgery which is likely to rule him out for the rest of the season

"In recent weeks we have been performing well, and if you keep doing that and making chances, then the results should follow."

Norwich are six points behind the Swans, who recorded a surprise 2-1 win at third-placed Arsenal on Wednesday

Neil, though, has no interest in putting his team's fate in anyone else's hands

"We need to win games to save ourselves, we can't rely on other people, so I am not thinking why did Arsenal not win?" he said

"It is not up to Arsenal to do us any favours. It is up to us

The Norwich boss added: "The one strength we have as a club is that everybody is stuck together and is fighting really hard - you see no dissent, the lads are fighting for the cause and there are no issues within the squad whatsoever ."