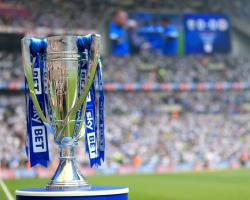 Looking back over the last eight seasons, 19 clubs have gained promotion, with Hull, Norwich and QPR going up twice and Burnley three times.

Of these, only Crystal Palace avoided making a loss, with average losses among the 19 of more than ÃÂ£300,000 per week.

Most of these clubs made money in their first season in the top flight, but after four years this falls to just one in four still in the black - unsurprising when you consider that one in three were immediately relegated and two in three were down again within three years.

The report, which is titled 'Over the Line', puts this down to the "economic exhaustion" caused by trying to compete with the more established Premier League clubs.

In a statement, Vysyble's Roger Bell said many fans and owners of clubs in the English Football League (EFL) see promotion to the top flight as a "golden ticket to untold riches" but in reality trying to stay in the Premier League is "ultimately loss-making".

This "financial over-exertion" can lead to long-term problems, Bell continued, which cannot be solved by parachute payments to relegated clubs, even though they can now total more than ÃÂ£90million.

"EFL clubs who spend beyond their means are, in fact, risking their futures by chasing a dream that is just that, a dream, and one that is actually more likely to end up as a financial nightmare," Bell added.

According to the report, Blackburn, Bolton and Fulham are examples of this, while both Aston Villa and Sunderland face similar challenges.

Vysyble's analysis, however, is not shared by all football finance experts or the leagues.

A spokesman for the EFL told Press Association Sport it is "one of the most competitive competitions in world football" and was in a "strong financial position".

" Reports of this nature inflame the position and confuse the reality of the situation for supporters," the spokesman said.

Citing the financial fair play rules introduced in 2012, the league's improved revenues and solidarity payments from the Premier League, the EFL spokesman said no club had been through an insolvency process for several years.

He added football is a " competitive industry", where progress up the league pyramid is the main goal, but said the EFL's rules are under regular review as its clubs "clearly face different financial challenges to those in the Premier League".

The Premier League declined to comment on the report, but it is understood it does not believe Vysyble's use of the concept of "economic profit" is particularly sensible when talking about football.

For Vysyble, economic profit - the difference between revenue and costs, including the so-called "opportunity of cost" of not doing something else with your money, such as leaving it in the bank - is the true cost of doing business.

For the Premier League, and others, simpler measures of income and operating costs are more relevant, particularly as leaving money in the bank is likely to have a negative impact on the pitch, which will have knock-on effects on the finances.

It is also understood some of those 19 promoted clubs would have broken even but for player bonuses triggered by those successes.

Bell, however, believes his report has highlighted the risks associated with pushing too hard for promotion, particularly at a time when the Premier League is split on how future broadcasting revenue is shared and parachute payments may "cease to exist".

" Owners who accept the risk of relegation but also preserve the balance sheet face much better prospects if the club is indeed relegated, with Burnley, Norwich and Newcastle proving to be excellent examples," he said.