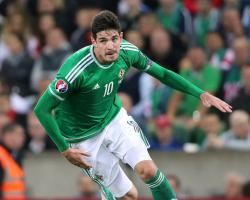 The Fermanagh forward has been unable to win over Canaries boss Alex Neil despite shooting Northern Ireland to their first major tournament in 30 years.

The 28-year-old hit the net seven times in nine matches in his country's qualifying campaign but has been restricted to just two substitute appearances at club level this season.

He scored in the first of those, a Capital One Cup win over West Brom, but has since been handed just 13 Premier League minutes.

The former Rangers striker is desperate to prove himself in the top flight but Neil has consistently been deaf to his claims.

"I'm going to have to sit down with the manager in January and have a discussion with him," said Lafferty.

"I know that I will need to play football in the new year and going into the Euros.

"It is difficult at my club at present with not playing, but I will keep training and working away in the hope I get my chance.

"I'd love to be playing at Norwich but if I have to go out on loan or be sold to play football that might be the way it will be.

"For the Euros I want to be in the best shape of my life and need to be playing to do that."

His Carrow Road struggles mean Lafferty appreciates the feelgood factor around Northern Ireland more than most.

The Irish Football Association wants to use Friday's friendly against Latvia as a celebration of the qualification that was secured with victory over Greece last month.

Given results in the recent campaign, it is a curious statistic that manager Michael O'Neill has yet to win a friendly in 10 attempts.

Should he buck that trend, Northern Ireland could see themselves set a new high watermark in the FIFA rankings.

"These are exciting times and hopefully Friday will be a sell out and it can be another big night at Windsor," said Lafferty.

We want to go out and put on a show for the fans.

We have never been higher than 27 so that would be great for Michael and the boys if we could get higher than that."