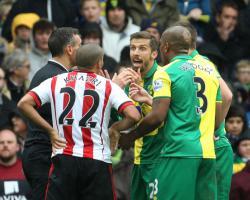 The two clubs were also warned as to the future conduct of their players and officials.

"Both Norwich City and Sunderland have been fined £30,000 and warned as to their future conduct for failing to ensure their players and/or officials conducted themselves in an orderly fashion," read a statement on the Football Association website.

The FA charge related to a fourth-minute incident during Sunderland's 3-0 victory over their relegation rivals.

Players and coaching staff from both teams were involved in a heated touchline clash after Norwich's Robbie Brady challenged DeAndre Yedlin.

Sunderland defender Yedlin fell into an advertising hoarding in front of the Black Cats bench and the two camps subsequently squared up to each other.

Norwich contested the charge, but the FA said it was found proven following an Independent Regulatory Commission hearing.

Sunderland's charge was accepted by the club.