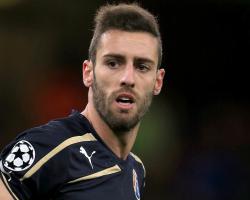 The Barclays Premier League club confirmed on Thursday the 26-year-old defender has joined for an undisclosed fee on a three-and-a-half-year deal.

Pinto came through the Porto youth system, before having spells at Rio Ave and Romanian club CFR Cluj ahead of his move to Zagreb in July 2013.

The defender, who won the Croatian league title in 2014 and 2015, brings with him experience of Champions League football this season, having played for Dinamo against Arsenal and Bayern Munich.

Pinto, whose paperwork was being processed on Friday, hopes to be able to help Norwich secure their place in the Barclays Premier League for another season

"I've worked hard to arrive in the best league in the world, so this move means a lot to me," he told Norwich City TV

That matches me well because my best qualities as a player are being fast and intense too.

"I want to improve as a player, and as a person

This is a fantastic country and I want to learn as much as I can from its footballing culture.

"I'm very excited to come here and play for a big club in the Premier League, now I'm looking forward to starting work to help the team achieve their goals."

Norwich manager Alex Neil believes Pinto will add depth to his squad, who are six points above the relegation zone and host Manchester City in the FA Cup on Saturday

He is an athletic and good defender and will bring us options at the back," said Neil