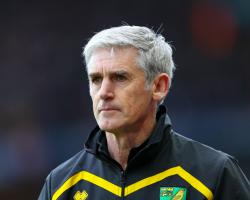 Webber had been placed on garden leave by the Terriers two weeks ago after expressing a desire to leave, with City having identified him as their first choice for the role

He told the club's official website: "In terms of the next stage of my career, the opportunity to come to a club the size of Norwich was something which I couldn't turn down

"The club are embracing how things are done in Europe, where it's been successful for a number of years.

"The attraction of having the remit to come in and massively affect the football department, from the tip of the iceberg with the first team right down to the academy, makes it an exciting challenge for myself.

"There's a real carte blanche to go and do it as I believe is right and you don't get many opportunities like that at big football clubs."

Webber moved to Huddersfield in 2015 and revamped their scouting operation, playing a large part in appointing David Wagner in November 2015

Canaries chairman Ed Balls added to the club's official site: "With an excellent track record and growing reputation in the game, he was the man we wanted to bring in once we identified the role as a crucial part of our new structure

"We're excited about the impact he will have as he leads all of our football operations and recruitment."