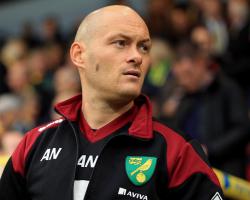 At 34, the Scot is the youngest of the head coaches in the top flight, his star swiftly on the rise after guiding the Canaries to promotion via the play-offs at Wembley having only been appointed in January.

Neil, though, is the first to admit a maiden campaign among the elite of English football has been a steep learning curve.

After a positive start, Norwich have lost five from the last six league matches as they edge ever closer to the relegation zone

Nevertheless, the former Hamilton player-manager cannot wait to go up against Wenger, the 66-year-old who has transformed Arsenal since arriving at the club in September 1996 - when Neil was still an apprentice at first club Airdrie.

"Arsene Wenger is extremely experienced, he has been there, seen it and done it, but in terms of using modern methods and techniques Arsenal would be one of the pioneers of that and trying to take the game forward," said Neil.

"In terms of his style and how he does things, he is very up-to-date.

"The reason he is regarded as one of the best-ever managers who has been in the game is that ability to keep turning teams around over a number of years and still be successful and challenging at the top end, yet keep that philosophy and build on it and grow.

"It is a tough task for us on Sunday, but one I am looking forward to and so are the players."

Neil hopes he can enjoy as long a coaching career as Wenger, and produce teams who are capable of such impressive displays.

"It is not even the longevity that I admire

It is the way his teams play, it is fantastic to watch as a football fan," Neil said.

I don't think there is any better than Arsenal."

Neil has adopted a more pragmatic approach in recent away games against the likes of Manchester City and Chelsea, while also grinding out a 1-0 win over Swansea in the last home match at Carrow Road.

The Norwich manager knows it will need just the right game plan to both nullify the Gunners' potent attacking threat while also remaining positive if they are to get anything out of Sunday's televised encounter.

"Arsenal are probably one of the most difficult teams in terms of figuring out how to come up against, certainly out of the ones I have looked at so far," Neil said on Canaries TV.

"It is about trying to make sure we curtail them as much as we possibly can, but also to try and expose the weaknesses that they have got.

"It will be a really good test for us, but we have been working on a few things and hopefully we can put it into a plan."