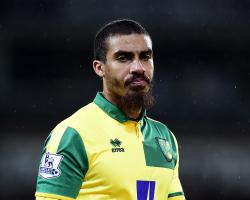 The 28-year-old has rejoined the Cherries in what is believed to be an ÃÂ£8million deal, a considerable profit on what Norwich paid for Grabban in the summer of 2014.

Despite an impressive first campaign at Carrow Road, scoring 12 goals to help the Norfolk club win promotion back to the top flight via the play-offs, Grabban featured only eight times this season.

Bournemouth had tried to recruit their former player again during the summer window, and in August, Grabban walked out of the Norwich team hotel ahead of the Capital One Cup tie at Rotherham, reportedly frustrated at not being able to see the move pushed through.

Neil believes given the circumstances and with the funds earmarked to be reinvested in the squad during the January window, sanctioning the transfer now made sense all round.

"We just felt, for us, he was a player who had run his course at Norwich really

He was not involved, he was not in our squads," Neil said at a press conference ahead of Wednesday's Barclays Premier League trip to Stoke

"Lewis contributed greatly to us getting promoted and started the season for us, then we had a couple of incidents afterwards, and to be honest I don't think we really recovered from that

I think it was one of those where Lewis had come to the conclusion that he was best suited to playing elsewhere, and we agreed with that

"Sometimes players have their heads turned and get their heart set on going elsewhere, and I think when that happens at times it becomes a difficult one, as you try and get the best out of a player and get him focused on his job.

"But in Lewis' situation? There was too much water under the bridge and it just made sense, because we were not utilising his talents.

"We had a commodity there that wasn't supplying anything for us, s o what we had to do was try and get the best value for that, re-invest it and bring someone in who can contribute."

By a quirk of the fixture list, Grabban could line up against his old club when Norwich head to Bournemouth next weekend, as Neil confirmed there was no exclusion clause as part of the deal

Northern Ireland striker Kyle Lafferty is another of the Norwich fringe players who could move away this month in search of regular first-team football, with Leeds said to be closely monitoring the situation

Neil, though, refused to be drawn on any other potential business, having last week secured the signature of Portuguese full-back Ivo Pinto from Dinamo Zagreb

While a much-changed Norwich team were well beaten 3-0 at home by Manchester City in the FA Cup third round, the Canaries have pulled clear of the relegation zone with three wins in the last four league matches

Neil is expecting another stern test at the Britannia Stadium.

He said: "It is a tough away game, Stoke are in good form, but these games are going to be absolutely crucial for us."