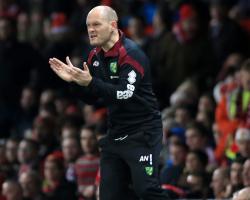 The Canaries were thrashed 3-0 at Tottenham on Boxing Day but remain outside the relegation zone on goal difference.

Victory over Villa would move Neil's team 12 points above their opponents, who are rooted to the bottom of the league after winning just one game all season.

"There are games in and about you that you've got to win, so I would probably call it a must-win, even though I don't think anything's going to be determined by this particular game," Neil said.

"However, three points against them certainly makes things a lot better.

Every game becomes bigger if you don't win games."

Norwich, like Villa, had just 48 hours between fixtures, but Neil was confident his players would recover in time.

"It will be interesting to see how we respond but other teams will have to do it as well, it's not as if it's just us," Neil said.

"It's not as if they're called upon to do it all the time, it's a one-off and we need to get ourselves ready because it's an important game for us."

Midfielders Wes Hoolahan and Gary O'Neil were left out of the side at White Hart Lane but both could return for the clash at Carrow Road.

Andre Wisdom and Matt Jarvis, however, are unlikely to be fit.

"Wes was one where if I had played him against Tottenham, he wouldn't have made the next one

The next game suits him," Neil added.

"Gary O'Neil was a different situation, he couldn't make the (Spurs) game as he wasn't quite ready

We had to give him an extra day's rest."