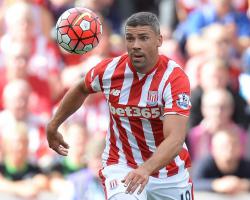 It is understood the Canaries made a ÃÂ£1.5million offer for the 31-year-old Republic of Ireland international which was turned down by the Potters.

The news, emerging on Friday, comes a day before the two clubs play each other at Carrow Road in the Barclays Premier League.

Walters has been with Stoke since joining them from Ipswich in 2010, making over 200 appearances in all competitions for the Staffordshire outfit and scoring 50 goals.

He netted 11 times for them last season, and has started both of their games so far this term.

But it will be interesting to see if he retains his place against Norwich - not least because Stoke now have ÃÂ£12million record signing Xherdan Shaqiri available and another playmaker, Bojan Krkic, back fit after long-term injury.

The likes of Ibrahim Afellay and Marko Arnautovic are also options making for major competition in the Stoke squad for places in the attack.

Walters' current contract with the club runs out next summer.