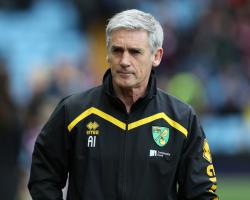 The Canaries are expected to complete a two-year deal for the German this week, Press Association Sport understands

Talks have been ongoing for weeks, with Webber believed to have met Farke in Germany, while Norwich considered several English options, including Barnsley's Paul Heckingbottom and Lincoln's Danny Cowley

Farke is likely to have a limited budget at Carrow Road with Norwich needing to offload several high earners in order to reinvest back into the squad.

Yanic Wildschut - who only joined from Wigan in January - Steven Naismith, Michael McGovern and Matt Jarvis could all be sold this summer