Norwich searching for a striker 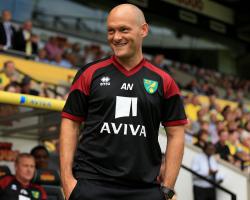 The Canaries have been linked with a variety of forwards over the summer since gaining immediate promotion back to the Premier League but so far no extra attacking options have been added.

Stoke are the visitors to Carrow Road on Saturday and Press Association Sport understands Norwich have been rebuffed in an approach to sign Republic of Ireland international Jonathan Walters from Mark Hughes' side.

But, despite remaining coy over who he is looking to recruit before the transfer window closes, Neil suggested both Hooper and Van Wolfswinkel could potentially have futures at Norwich - with the former linked with a return to former club Celtic as part of a deal to bring Leigh Griffiths in.

"As far as I am concerned there is no interest in Gary Hooper," Neil said at his pre-match press conference.

We won't be commenting on anything concerning any players, whether they are going or staying, because ultimately the ones we want to bring in are not our players."

Neil took a similar stance over Van Wolfswinkel, who spent last season on loan at St-Etienne having scored just once in his first season at Carrow Road.

The club-record signing returned at the start of pre-season with another exit widely anticipated but, despite not being involved in either squad for the opening two league games, Neil has backed the Holland international to come good.

"Ricky understands his situation," he said.

He trains with the first-team every day and he played in the Under-21s to get some minutes under his belt.

His task is to get himself into the first-team

He is training hard and trying to do that and scored in the development game (against Leicester on Monday)."

Having won 3-1 at Sunderland last weekend, Norwich will be confident of picking up their first points in front of their own fans after losing to Crystal Palace by the same scoreline on the opening day.

"The players deserve all the plaudits that they're getting at the moment, but the Sunderland game is done and we need to move on to the next one," Neil added.

I thought we played really well in the first game against Crystal Palace, albeit we didn't get a result

I think the players will take a lot of confidence from the manner with which we played, and the fact that we won the game so convincingly.

"We want to make sure that our home form is good, and hopefully we can start that on Saturday."

Neil's side could come up against transfer target Walters as the former Ipswich man has started both of the Potters' games so far this season.

He scored 11 goals for Stoke last season but his place in Hughes' team will come under increased threat following the club-record arrival of Xherdan Shaqiri.

Walters' contract expires next summer but Norwich will have to increase their initial bid, believed to be worth ÃÂ£1.5million, if they are to prize away the 31-year-old before September 1.