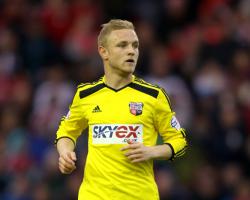 The 23-year-old, a former England Under-21 international, has joined the Canaries on a four-year deal

He excelled at Brentford during the 2014/15 campaign, scoring 12 goals in 47 games as the Bees reached the Championship play-offs.

"I've had a full pre-season and with our first game at the weekend I'm looking forward to hopefully bedding myself in quickly."

Manager Alex Neil, whose side kick-off their Championship season against Blackburn on Saturday, added: "Alex is an exciting player who is capable of both scoring and creating goals.

"He is proven at this level having excelled at Brentford two seasons ago, and adds to our attacking options

I'm really looking forward to working with him on a day-to-day basis."

Neil has also added a goalkeeper to his ranks, handing former Portsmouth player Paul Jones a two-year deal at Carrow Road, following the departures of Declan Rudd and Jake Kean