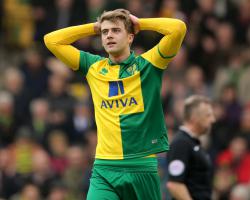 Manuel Pellegrini had said the visitors would need to win at least nine of their remaining 10 games to win the title, so victory at Norwich was a must.

But it was Alex Neil's relegation-threatened side who came closest to scoring as Patrick Bamford hit the crossbar in the first half.

The point was just Norwich's second in 10 games and the clean sheet was their first since their most recent win, over Southampton at the turn of the year, while City are nine points behind leaders Leicester.

For teams with title aspirations, victory at relegation candidates Norwich should be a formality

It was anything but for City, whose only half-decent performer was Sergio Aguero.

John Ruddy dealt unconvincingly with a free-kick from Aguero, who then shot narrowly wide across goal.

The Argentina striker next ran at the Norwich defence and Ruddy made a sharp save to his right.

Norwich were set up not to concede, having last claimed a clean sheet on January 2

A 3-0 FA Cup third-round loss to City at Carrow Road was the first fixture of that 11-game run, but the visitors showed nothing like the same cutting edge this time around.

Once it settled, he sweetly swung his left-foot and the result was a 25-yard volley which Joe Hart watched hit his crossbar.

Matt Jarvis, who switched to the right when Nathan Redmond limped off with what appeared to be a calf problem, next went close.

Jarvis' deflected shot looped just wide and referee Jon Moss ruled there was no time to take the resulting corner, much to Gary O'Neil's annoyance.

O'Neil was a nuisance throughout

The midfielder was one of a number of Norwich players who made a habit of bundling David Silva to ground as agricultural won over cultured play.

Still Aguero was City's most threatening player, yet his efforts were not matched by team-mates.

The anonymous Wilfried Bony was replaced by Raheem Sterling and Aguero became the attacking focal point.

He tumbled into the area after running at Tim Klose, but Moss was correct in adjudging the foul to have taken place outside the area

Silva's free-kick went into the wall

It summed up City's efforts.

Dorrans shot wide for Norwich and Aguero blasted over as he tried to find an 88th-minute winner, but even he could not prevent the stalemate.