Norwich still keen to get deal for Steven Naismith done 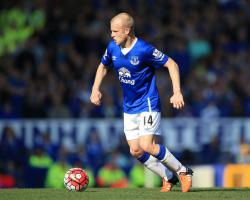 Naismith, who has scored 18 Premier League goals in 103 appearances for the Toffees, has been a long-term target for Neil, but with the transfer window already well over two weeks old the Norwich boss has so far been unable to land his man.

"It has been nearly there for the best part of two weeks, so we will wait and see," said Neil of the 29-year-old Everton forward

"He is an established Premier League player, who has played in this division for countless years and he has got goals, too

He is experienced, he is determined and he has got good legs and can get about the pitch

"He is an international and he is a good lad off the pitch, so there is a whole host of reasons as to why we would be interested in that type of player."

Neil, who was speaking following his side's 3-0 defeat at Bournemouth, also confirmed his interest in signing Wolfsburg defender Timm Klose after reports in Germany claimed the two clubs had reached an agreement

But after seeing his Norwich side outclassed on the south coast, Neil insists the result will not sway his decision-making in the transfer market

"What we are not going to do is respond on the back of one result," Neil added

"We have been poor today and we have lost the game, but what I am not going to do is say we need another five or six players as the boys haven't been doing well enough, because that is not the case

"That team selected today has been relatively consistent from the line-up in the last five or six games, and they have managed to put three or four wins together

"We are still trying to attract players - that was the same before this game - and that remains the same after this game."

Charlie Daniels, who scored Bournemouth's second from the penalty spot either side of goals from Dan Gosling and debutant striker Benik Afobe, said the Cherries were delighted by the manner of their win

"It was a good afternoon for us," said Daniels

"We weren't happy with the West Ham game, not only the result but the way that we played

We wanted to put that right.

We probably could have scored a few more goals."

It was Daniels' cross which enabled Afobe to mark his debut after his club-record acquisition from Wolves.

"I saw Benik pointing to where he wanted it," he continued

It was a great finish and that's what you want from your number nine.

"We haven't had many training sessions since he arrived but from what he has shown, he is learning and fitting in straight away.

I can only see him getting better."