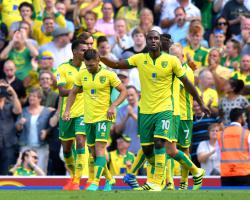 Jacob Murphy, Wes Hoolahan, Cameron Jerome and Steven Naismith all got on the scoresheet inside the first hour as the Canaries ruined Owen Coyle's first competitive match in charge of Rovers.

Albion led with half an hour gone after responding to Britt Assombalonga's early effort with goals in quick succession from Lucas Akins and Lloyd Dyer.

Forest levelled just before the break through Thomas Lam and second-half goals from Oliver Burke and Assombalonga secured victory for new boss Philippe Montanier, although Burton grabbed a late third through Tom Naylor.

Ward's first two came either side of an equaliser from Conor Hourihane before a David McGoldrick penalty extended the lead.

Marley Watkins pulled one back for the visitors 16 minutes from time but Ward's third put the result beyond doubt.

Abraham changed the game when he levelled after 81 minutes and Reid snatched victory with 90 on the clock.

Summer signing Alex Gilbey had given Gary Caldwell's Latics the lead after 32 minutes.

Nigel Pearson's reign as Derby manager began with a goalless draw against Brighton at the iPro Stadium while another new boss, Cardiff's Paul Trollope, saw his side held by the same scoreline at Birmingham

Goals from Danny Ward and Will Vaulks inside the opening 20 minutes got Alan Stubbs' tenure with the Millers off to a flying start but George Saville pulled one back.