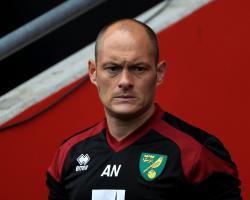 Jonny Howson's close-range, second-half header secured victory on Saturday after the manager had reorganised his team into a more defensive shape to attack Swansea on the counter.

Norwich allowed their visitors the majority of the possession - as Arsenal had done in their 3-0 away victory a week previous - to successfully end a run of six games without a win, but Neil also acknowledged that such negativity represented a risk in front of a home crowd when the Canaries were not hosting a top-four team.

"We watched Arsenal, obviously, and the first half they conceded possession, and then they managed to hit them and hurt them on the counter-attack," he said.

"I thought we did similar: first half our use of the ball wasn't good enough, which meant we sat deeper and deeper, but (as the) second half wore on we were much more threatening going forward and it looked as if we could have scored more.

"When you win, now it's the perfect plan

That's the thin lines and thin margins of football

What you've got to do as a manager is what you think's right for your team to get the points, not what anybody else thinks.

"As soon as you're doing that, you're in the wrong job."

The manager refused to directly blame them for Swansea's poor run - they have won only once since August - but said that the key to arresting his team's decline comes in inspiring those previously so crucial to him in the final third.

"It goes hand-in-hand with the period we're in," he said

"We're not as potent as we want at the moment, we're arriving in those areas and we're not quite making good use of them enough.

"That's something for me to work with the players

They're good enough, all of them, it's about getting them sharper and righter, and to create those chances, to take them."