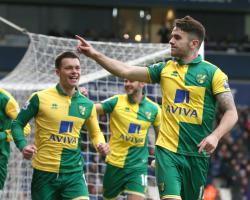 The visitors clinched a 1-0 victory at The Hawthorns to end a winless run of 11 games and move three points clear of the Barclays Premier League bottom three.

Sunderland could overtake them with a win in their crunch north-east derby with Newcastle on Sunday but Norwich sealed their first away clean sheet of the season.

The Baggies, unbeaten in their last eight home games, were poor and failed to test John Ruddy all game.

The Republic of Ireland international was the most inventive for Norwich and signalled his intent early when he fired a 20-yard free-kick over.

Claudio Yacob, who has scored once in 115 games for West Brom, then whistled a rasping volley wide after 20 minutes which had Ruddy struggling.

There was little between the teams, who lacked quality and urgency to make the contest interesting.

Norwich needed to be more proactive given their precarious position in the table but barely looked like making a first-half breakthrough.

Dieumerci Mbokani was forced wide too often while Chelsea loanee Patrick Bamford was anonymous on his second start for the club.

It was comfortable for Albion, although the hosts hardly threatened themselves, and they needed a gift to go closest just before the break.

Gary O'Neil sloppily gave the ball to Stephane Sessegnon and the midfielder drove at the Norwich defence before shooting wide.

It was a let-off for Norwich, who came into the game without a win since January 2, b ut they came out firing in the second half to take the lead five minutes after the break

A neat ball up to Mbokani allowed the striker to find space on the edge of the box and feed Matt Jarvis.

The winger then made a complete hash of his own attempted shot but the ball broke for Brady to fire under Ben Foster from seven yards.

There was little immediate response from the hosts and Bamford shot wide from a tight angle as Norwich grew in confidence.

The Baggies, unbeaten at home since December, saw plenty of the ball but continued to be met by a scrappy Norwich rearguard

The Canaries remained calm and Jonny Howson had a chance to seal the game during six minutes of stoppage time but could not control the ball before Ben Foster gathered as the visitors held on.