Steven Naismith aims to take his chance and impress with Canaries 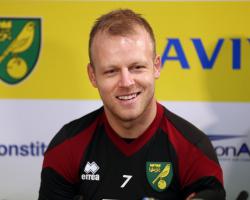 The Scotland international completed his switch from Merseyside to Norfolk earlier this week, for fee reported to be around ÃÂ£8million.

Although Naismith - who was close to moving to Carrow Road in the last transfer window - netted a hat-trick against Chelsea in September, the forward had not featured since December 28, having recently shaken off an ankle injury.

Canaries boss Neil confirmed both Naismith and Portuguese full-back Ivo Pinto, signed from Dinamo Zagreb earlier in the window, were in his plans for the televised lunchtime kick-off against Liverpool.

However, a decision has yet to be made over Swiss defender Timm Klose, who joined from Wolfsburg on Monday but has only had a couple of full training sessions with his new team-mates.

Naismith made 123 appearances for the Toffees, scoring 25 goals - including a memorable equaliser against city rivals Liverpool during his first Merseyside derby at Goodison Park in October 2012.

The 29-year-old would relish another opportunity to put one past the Reds if given the nod by Neil, whom he played against during their time in Scotland.

"Speaking to the manager here, I am going to get an opportunity to play which I need to prove I am worth, then once you get that chance I need to do well to stay in the team and I am relishing that opportunity," Naismith said at a press conference.

"Just being involved is great, it is a nice coincidence that it (his first match) is against Liverpool.

"It will be a tough game, one which we need to be ready for from the off, they have some great players, but at home especially Norwich have looked very strong in all their games, so I am looking forward to hopefully being involved in some way.

"I scored my first goal (for Everton) against them, so if I could replicate that, it would be another good start."

Naismith added: "The manager knows what my attributes are, so hopefully I will bring an attacking threat, some chances and goals."

Liverpool have struggled for consistency in the league over recent weeks, but have progressed in both cup competitions.

Canaries boss Neil, though, is expecting a stern test from Jurgen Klopp's men as his side aim to arrest a run of three successive league defeats.

"It is a team in transition at the moment, with a mixed bag of performances, and they are still trying to find their best line-up," he said.

"Liverpool are more direct now than Brendan Rodgers' team and they play higher up the pitch, but both teams pose you difficult questions in different ways

We just need to make sure we are prepared for that."

On loan Liverpool defender Andre Wisdom is not eligible to face his parent club.