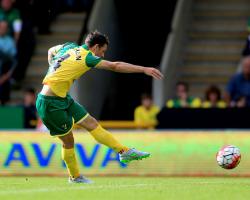 The last time the 33-year-old scored a Premier League goal for the Canaries was 18 months ago and he refused to celebrate as he was looking to force through a move to Aston Villa, the opponents that day.

But all was forgiven as Carrow Road basked in his undoubted ability, playing the leading role in a 3-1 victory to lift Alex Neil's side into the top half of the table.

He provided a fantastic assist for Cameron Jerome to open the scoring in what was a largely uneventful first half before scoring an impressive second for himself.

The Canaries began brightly and enjoyed much of the early possession, although the visitors did show their threat and pace on the counter-attack from the off.

Bournemouth were coming into the game and only a fine last-gasp sliding challenge from Robbie Brady prevented Callum Wilson opening the scoring from six yards out.

However, the striker could only hit the side-netting from close range.

He made amends moments later as Hoolahan again provided the pass, skipping past Steve Cook before squaring to Jerome to sweep home his first goal of the season.

The Cherries did come close to equalising on the stroke of half-time as Wilson and Andre Wisdom both went for Cook's near-post cross, with the ball coming back off the post.

Despite their rallying before the break, Bournemouth found themselves two behind seven minutes after the restart as Hoolahan finished calmly from the edge of the area to continue a fine afternoon.

Neil's side were running rampant and Jerome came close to converting Wisdom's cross, only to see Tommy Elphick nick the ball off his toe and put it behind for a corner.

Brady came close to a fortuitous third as his whipped free-kick evaded everyone in the Bournemouth box and curled just inches wide of Artur Boruc's right-hand post.

The Republic of Ireland international came even closer shortly afterwards as he latched on to Nathan Redmond's threaded through-ball and thrashed an effort off the opposite upright.

The killer third goal came as Bournemouth once again gave up possession all too easily allowing Norwich to break three against two, and Jarvis made no mistake having been fed by Jonny Howson.

Hoolahan was replaced by Graham Dorrans and all four corners of the stadium clapped as home fans rose to their feet to see him off with a standing ovation, but Neil would have been furious at the way his side surrendered their clean sheet as Cook headed home Simon Francis' corner to reduce the arrears

Dieumerci Mbokani was given a 10-minute cameo to show the home fans what he could do having moved on loan from Dynamo Kiev, and he should have added a fourth but could not convert Redmond's cross as he slid in at the near post.