Which teams can go up and down this weekend 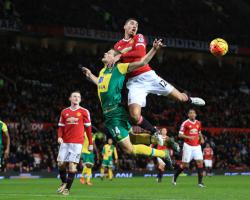 Here, we take a look at where some of the key clashes will take place.

But three straight defeats since have seen the Canaries stutter

Anything less than victory against Louis van Gaal's Champions League-chasing side on Saturday lunchtime would leave Norwich second-bottom and, if Newcastle and Sunderland win later in the day, Alex Neil's men could find themselves up to four points adrift of safety with two games to play.

With Burnley already promoted to the Premier League, this is a make-or-break clash for Middlesbrough and Brighton in their bids for a top-two finish

With the teams level on points heading into their final regular-season fixture, Boro know they need only a point to take the final automatic promotion berth

For Brighton, only victory will guarantee their return to the top division for the first time since 1983

Aitor Karanka's side are unbeaten in nine games, while Chris Hughton's Albion head to Teesside on a 13-match unbeaten streak.

Sky Bet League One: Fleetwood (at home to Crewe)

Steven Pressley's Fleetwood head into the weekend in the final position of safety, two points ahead of their Lancashire neighbours and boasting a superior goal difference, meaning a draw would almost certainly secure their status in League One, where all this weekend's action is on Sunday.

With all three teams claiming away wins last weekend, the battle for the last two automatic promotion places will come down to Saturday's last day of the regular season

Second-placed Accrington host Stevenage, while third-placed Oxford are at home to Wycombe

Only a win for Rovers will realistically give them a chance of an automatic promotion spot.