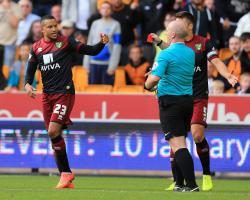 Norwich 0-1 Charlton: Match Report - view commentary, squad, and statistics of the game as it happened.Resolute Addicks stun CanariesCharlton rounded off a resolute defensive display with a late winner to inflict a shock 1-0 home defeat on Championship leaders Norwich.The Londoners appeared to have come to Norfolk looking for a point to preserve their unbeaten league record - but after withstanding all the hosts could throw at them they ended coming away with all three.A rare break ended with captain Johnnie Jackson's deflected strike hitting the back of the net - and a classic smash and grab raid had been completed.Unbeaten in the league since the opening day of the season, the Canaries took just three minutes to carve out their first clear-cut chance of the evening

Wes Hoolahan put Lewis Grabban in on goal through the inside right channel and it took a smart stop from Stephen Henderson to keep out his fierce drive.Grabban also fired a long-range effort just wide as Norwich dominated the early stages but Charlton were defending well and also posed an occasional threat themselves, with John Ruddy saving Igor Vetokele's shot on the turn.Play became more fragmented as the game wore on, however, with both defences largely untroubled

The hosts did have the ball in the net on 41 minutes, but Russell Martin's close range effort was disallowed for a foul by Bradley Johnson on Henderson as the keeper attempted to collect a corner.It completed a fifth successive goalless first half for the Canaries - but the good news for home fans was that they had scored 12 second half goals in that period.Norwich were quick out of the blocks after the interval and within two minutes Henderson had been tested again after Cameron Jerome had latched on to Grabban's clever pass and fired goalwards.Jerome then got his head on a teasing Nathan Redmond cross, but the connection was not nearly full enough and the ball drifted harmlessly wide.It was all Norwich now and the under-pressure visitors survived loud penalty appeals when the ball appeared to strike Andre Bikey on the arm in the area.Redmond then tried his luck after working some space on the edge of the area but his low shot lacked the power to trouble Henderson.Charlton also had a remarkable escape a few minutes later when the ball broke clear after Henderson had saved well from Redmond

It looked as though Bradley Johnson had to score but Bikey got managed to block and Lawrie Wilson completed the clearance on the line.As the onslaught continued a superbly timed tackle from Bikey diverted Grabban's dangerous looking shot for a corner before the City striker curled one narrowly wide after being set up by substitute Jonny Howson.It seemed as though it would only be a matter of time before Norwich scored - but incredibly it was Charlton who struck first.There seemed no danger when Jackson took aim from distance but his shot took a deflection and completely deceived a wrong-footed Ruddy to find the net