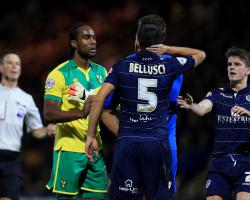 Norwich 2-1 Bolton: Match Report - view commentary, squad, and statistics of the game as it happened.Jerome double sinks BoltonStriker Cameron Jerome's brace got Norwich going again in the Sky Bet Championship as they beat Bolton 2-1.Neil Adams' side had gone five games without a win prior to the Friday night clash and were in desperate need of a boost.Leading marksman Jerome gave them it, scoring a goal in each half to secure an impressive success over Neil Lennon's revitalised Bolton.It was due reward for an industrious showing from the home side, who appeared keen not to let the grass grow under their feet after not winning at home in the league since August 19.Bolton got a late consolation through Chung-yong Lee, but it was not enough to get them something to take back to Lancashire.Desperate to get on top early and not leave anything to chance, Norwich were quick out of the blocks.Alex Tettey had a trademark bustling run and shot over and the opening goal arrived 12 minutes in.Jerome won a header on halfway and flicked in field to Jonny Howson

The midfielder looked up and played a delightful through ball to Jerome who had ran on, collected and, clean through, beat Andy Lonergan from just inside the area.Bolton's response was limited, with Darren Pratley heading wide at the back post and Neil Danns having a free-kick charged down.Norwich carried the most danger, with Nathan Redmond cutting in and shooting wide and then squaring for Gary O'Neil who was off target just before the break.England Under-21 winger Redmond continued to cause chaos on the second half and hit the post 11 minutes in.He exhanged passed with Kyle Lafferty in a high-speed one-two and got into the right six-yard box but Longergan got a strong hand on his cross-shot and touched it onto the post.Redmond also hit over from the edge of the box but it mattered little as Jerome got up at the near post to nod in O'Neil's corner with 61 minutes gone.A hat-trick would have followed had be been able to get to Michael Turner's flick-on of another cross, while full-back Steven Whittaker should have added a third when he shot into Lonergan after making his way into the box.Substitute Max Clayton should have got Bolton back in but hit wide when clean through, while Lonergan remained the busier keeper, pushing away Lewis Grabban's long-ranger.Bolton had hope with four minutes left as Lee snuck into the box and clipped past John Ruddy, but there would be no thrilling fightback