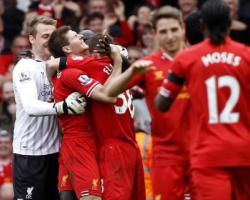 Liverpool go five clear at topRaheem Sterling scored twice and Luis Suarez broke the 30-goal barrier as Barclays Premier League leaders Liverpool beat Norwich 3-2 at Carrow Road to move five points clear at the top of the table.The Reds showed their intent to make the most of Chelsea's shock home defeat by Sunderland on Saturday, and romped 2-0 ahead inside 10 minutes as the relegation-threatened Canaries were ripped apart with a superb 25-yard effort from Sterling, before Suarez tucked home from close range.However, Norwich - just two points above the dropzone - rallied after Gary Hooper reduced the deficit following a poor punch by Simon Mignolet only for Sterling to slot home a deflected third on the break.Robert Snodgrass set up a tense finale with his far-post header with 13 minutes left, but the Reds secured what looks to be a priceless victory in their bid to win a first championship in more than 20 years.With England forward Daniel Sturridge missing because of a hamstring injury and Jordan Henderson suspended following his red card against Manchester City, Joe Allen and Lucas Leiva came into the Liverpool midfield

Suarez - who has scored 11 goals against the Canaries in the last four meetings - led the attack as the Reds looked to move five points clear of Chelsea.It was Sterling, though, who made an instant impact, firing Liverpool in front after just four minutes.The ball was worked into the middle from the left, where Sterling held it up before turning goalwards, sidestepping Bradley Johnson and as Michael Turner also stood off, the England international gleefully cracked a superb 25-yard effort into the corner past John Ruddy.Norwich, who had lost the last three matches without scoring a goal to plummet towards the Sky Bet Championship, needed a response.The hosts briefly rallied as a backward header from Hooper was flicked over, but Liverpool went 2-0 up on nine minutes.This time, Sterling was the provider as he cut the ball into the Norwich area from the left and Suarez arrived on cue to steer the ball into the bottom-right corner for his 30th goal of the season.To their credit, Neil Adams' reshaped side did at least offer a bit of fight, with Hooper's close-range effort hacked away from a crowded six-yard box.Liverpool, however, soon weathered the all-too-brief storm, and were back in cruise control as the half-hour mark approached.Scotland winger Robert Snodgrass was fortunate to only get a yellow card from referee Andre Marriner after sliding through Allen out on the far touchline.England Under-21 winger Nathan Redmond tested Mignolet with a 25-yard drive, which the Reds goalkeeper pushed away.Norwich forced a spell of pressure at the start of the second half, and pulled a goal back on 54 minutes.A high cross in from the right by Snodgrass was punched by Mignolet, under pressure from Johnson, onto Martin Skrtel

The ball dropped to Hooper four yards out and the former Celtic man slotted home his first goal since Boxing Day.Suddenly, Carrow Road came alive as the hosts sniffed the most unlikely of fightbacks.Liverpool, though, remained dangerous on the break and it was 3-1 on 62 minutes, as a stray pass from Norwich midfielder Johnson was punished in clinical fashion.Sterling picked the loose ball up just inside his own half before darting forward and riding two challenges into the Norwich penalty area.Johnson had tracked back, but as he went to block the shot, the ball cannoned up and over Ruddy into the net.It was all or nothing now for Norwich, and Snodgrass forced a smart save from Mignolet with a low effort from 20 yards before Redmond's effort was deflected behind and a header from captain Russell Martin dropped onto the roof of the net.Norwich threatened to make a game of it again on 77 minutes when Snodgrass got up above Jon Flanagan to head in a deep left-wing cross from Redmond.Mignolet showed good reactions to save a downward header from substitute Ricky van Wolfwinskel, who has scored just once since his club-record B#8.5million summer move from Sporting Lisbon.Liverpool, though, saw out the closing stages without any more real scares and could have added a fourth in stoppage time as Ruddy saved from Suarez, as Brendan Rodgers' side recorded an 11th straight league win to have one hand on the trophy ahead of the showdown with Chelsea at Anfield