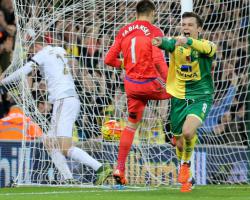 In a match with few significant chances, midfielder Jonny Howson headed the only goal midway through the second half to secure the three points that crucially keeps them clear of the Premier League's bottom three

Swansea, with just a solitary win since August, and perhaps in a demonstration of manager Garry Monk running out of ideas, were unchanged from last week's 3-0 defeat by Arsenal.

Norwich, similarly without a single win throughout October, started with Andre Wisdom, Gary O'Neil and Wes Hoolahan in place of Youssouf Mulumbu, the injured Matt Jarvis and the suspended Russell Martin.

Both teams were unquestionably out of form and equally lacking in confidence, and throughout the opening 45 minutes it consistently showed

Beyond Cameron Jerome's ninth-minute effort, in which the striker, despite being unchallenged and blessed with time and space inside the six-yard box, somehow managed to head Robbie Brady's masterful left-wing cross high and wide, threats on goal were almost non-existent.

Howson hit a well-struck 25-yard shot on target soon after, when Federico Fernandez headed the ball into his path near the edge of the area, but did so far too close to Lukasz Fabianski and the goalkeeper comfortably saved.

Thereafter, amid the lively Hoolahan's attempts to add some creativity to an otherwise-flat affair and Jonjo Shelvey's repeated, misplaced passes, the first-half largely played out with Swansea doing little in possession and Norwich, defending well owing to their five-man midfield, content without the ball when that was the case.

G iven Shelvey is not known for his defensive ability he may feel fortunate that the latest England squad had already been picked, though in his defence, ahead of him the talented Gylfi Sigurdsson and Jefferson Montero were equally indecisive as Norwich's compact shape nullified their threat

When almost immediately after half-time Brady forced a fine save from Fabianski with a close-range header from Howson's cross, it was hoped that each team's desperate need of three points would inspire a greater intensity, but at least until Sigurdsson went close in the 66th minute the game's pattern was largely unchanged

With little pressure building, Sigurdsson hit the top of the crossbar with a curling shot from substitute Wayne Routledge's cross

Equally out of nowhere and at the opposite end, O'Neil shot wide of the target with a powerful effort, but with that Norwich took encouragement, and the opening goal followed

Brady won a corner when his shot, from the edge of the area, was saved by Fabianski, and from the resulting corner he crossed to substitute Dieumerci Mbokani, who left the goalkeeper out of position by heading into Howson's path from where the midfielder nodded in with ease from the closest of range

Worryingly for Monk, despite time and plenty of possession, his team simply never came close