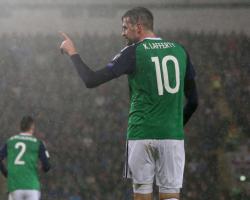 Having been ostracised in Norfolk since Neil's appointment nearly two years ago, Lafferty found himself back in favour immediately before the international break, though his goal from the bench against Leeds was not enough to prevent the Canaries slipping to a third successive loss.

The Championship recess will have given Neil a contemplation period, and Lafferty provided food for thought with another strike in Northern Ireland's 4-0 win over Azerbaijan on Friday to take his tally to five in a season where he has only accrued 305 minutes for club and country.

The 29-year-old had accepted his Norwich career was over after Euro 2016 but, unable to secure a loan move away on deadline day, he will remain until at least January and Lafferty is hopeful Neil will now back him to right their ship.

"Hopefully getting the goal for Norwich last week means I might be given more of a chance," he said.

I haven't given up hope

Alex Neil is a manager I want to play for

I respect him and he's a good young manager.

"I feel I have bided my time and now after these internationals I'll go back and be given more chances to play first-team football.

"Hopefully he was watching (the Northern Ireland game)

All I can do is score goals when I'm on the pitch - that's my job and I believe I have done that.

"Hopefully he'll need me and I'll go on to score the goals which can kickstart Norwich and get them up to the Prem again where they belong."

Unlocking the striker's potential has not been a problem for his international manager Michael O'Neill ever since the talisman reached a crossroads in a 2013 loss to Portugal, Northern Ireland's last at home, when Lafferty was sent off 13 minutes after coming on.

Since then, he has netted 10 goals in 13 qualifiers

The secret, according to the player himself, has been O'Neill imbuing him with belief.

"I know I haven't played proper club football for two years but when I pull on the Northern Ireland shirt I play well because I have a manager who believes in me and tells me I will go out score goals and be the hero," Lafferty added.

"He still calls me up to squads, still selects me in teams, still talks to me, still pulls me to one side for one-on-one chats

Obviously I'm disappointed if I'm not starting in every game but I think we have enough respect for each other that we just get on with it.

It's a great feeling to know that I can repay his faith in me by scoring goals and I hope he is Northern Ireland manager for a long time to come.

He knows I'm desperate to play for him.

Some have paid off but when he does give me a chance I usually respond with goals for him."