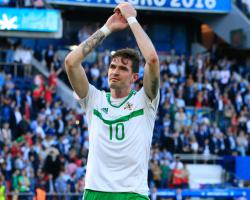 The 28-year-old started twice for his country at Euro 2016 this month despite not starting for his parent club since January 2015.

He has since been loaned out to Turkish club Rizespor and Birmingham and though the Canaries find themselves back in the English second tier next term, Lafferty does not expect to be part of their campaign in the final year of his deal.

The forward, who scored seven times in the qualification process for Euro 2016, recently got married and when he returns from his honeymoon he anticipates seeking a new employer.

"When I come back I will probably be looking for a new club," Lafferty said.

"I haven't really had any contact with Norwich over the summer but the fans have been absolutely brilliant with me.

Lafferty and the rest of his Northern Ireland colleagues were back in Belfast on Monday having been knocked out of the Euros following a defeat to Wales two days earlier.

Although their run ended at the last-16 stage, 10,000 fans turned up in the Northern Irish capital to congratulate Michael O'Neill's squad on their achievements in their first major tournament finals for 30 years.

"I didn't think I'd ever see scenes like that," Lafferty admitted.

"Since I came into the squad we have been up and down and we finally got to the levels we knew we could get to.

When that happens it shows what we can all do

"With what we achieved in qualifying and again at the tournament, I think we proved a lot of people wrong.

"There were people who thought they knew it all about what we were going to do - or not do - but we proved they haven't a clue.

"We went beyond anyone's expectations

But as good as it was to be standing in front of the fans in Belfast, we know we should probably still be in France preparing for the quarter-finals, but that's football for you.

"To see the fans give us a heroes' welcome after that is exceptional."