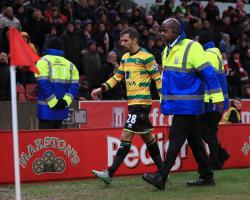 O'Neil was sent off in the 31st minute of the Barclays Premier League contest at the Britannia Stadium - which was level at 0-0 at the time - after needlessly clattering Ibrahim Afellay from behind with a sliding tackle.

The Canaries swiftly responded to Jonathan Walters' opener for the hosts just after the break as Jonny Howson equalised with a fine strike within six minutes.

But the man disadvantage ultimately proved too much for Neil's side, with them falling behind again midway through the second half thanks to a Joselu effort, then having their fate sealed by Ryan Bennett's unfortunate own-goal 12 minutes from time.

When asked after the game if he could understand what had happened with O'Neil, Neil said: "No, basically.

"I think it was just a bad decision from Gary

The ball was going out aimlessly on the halfway line, I don't think there were any flashpoints before that that riled him up, and I was as surprised as anyone else to see the tackle that went in.

"To be honest, there is no defending it

It was certainly a sending off and Gary apologised to his team-mates at half-time.

"He's an experienced player and if I was to pick anyone in our squad who wouldn't do that it would probably be Gary O'Neil.

"It was completely out of character but to make that decision in such an important game was silly to say the least.

"He knows he's done wrong and me slating him here isn't going to help that.

"But it's disappointing for all concerned because it's not helped the cause tonight and it's certainly not going to help our cause in the next three games to have an experienced player missing."

O'Neil echoed some of his manager's words as he later said sorry to supporters via Twitter, writing: "Apologised to all the lads & the staff @ Ncfc

Massive apology to all fans as well! Made a big mistake

Neil had no doubt the incident had been a "big turning point".

The Scot - whose team remain 15th, five points clear of the relegation zone - said: "It made our task a lot more difficult

Up until that point I thought we'd started the game really well.

"It was a relatively even game and you could even argue that we shaded it.

"We were pleased with how the game was going but that was a big turning point, it gave Stoke an advantage, and to be fair to them they took advantage of it."

Stoke boss Mark Hughes could not understand O'Neil's challenge either but was sure it was dangerous.

"It was a strange decision from the lad to go in with that challenge," said Hughes.

We were just shepherding the ball out to take a throw in.

It is a dangerous challenge - I think everyone accepts that."

Hughes - whose men are up to seventh, only four points off the top four - also revealed the hamstring injury that ruled Xherdan Shaqiri out of the game is set to keep the Potters winger sidelined for 10 to 14 days.