Norwich ease past West Brom in Capital One Cup 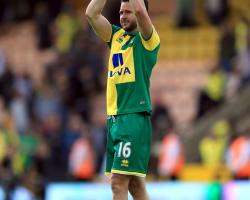 Manager Tony Pulis made 10 changes to a West Brom team that impressed in winning 1-0 at Aston Villa on Sunday, starting James Chester at right-back and Victor Anichebe in defensive midfield.

Significantly more energetic, Norwich should have taken the lead in the 21st minute when Dieumerci Mbokani created space by turning inside the area before sending his powerful shot wide.

Elliott Bennett was soon similarly wasteful from only six yards when he also missed the target from the rebound to Gary O'Neil's deflected shot which came back off a post.

The first chance for Pulis' team came five minutes into the second half when Craig Gardner, from the edge of the area, shot narrowly wide, and even then Norwich were ready to react.

Pursuing Mbokani's 62nd-minute pass, the on-loan Jarvis ran with purpose into the West Brom area before powerfully striking, first time with his left foot, beyond Anders Lindegaard and in off the underside of the crossbar.

Had Rickie Lambert's team-mates produced the same passion an equalising goal may have been forthcoming, but as it was their best chance to equalise was rescued by an outstanding recovering tackle from last man Ryan Bennett on James McClean when he had been played clearly through

Lambert later tested goalkeeper Declan Rudd with a powerful shot from the edge of the area, and some of his fellow fringe players - perhaps sensing the opportunity to earn first-team positions a little late - also pushed forward.

All it did, however, was leave them vulnerable to the counter, and with five minutes remaining O'Neil capitalised by playing in substitute Lafferty to run clear and produce a composed, left-footed finish to double their advantage and secure victory