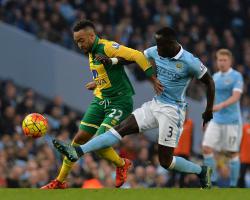 The Canaries host Swansea out to arrest a run of four successive defeats which have left the promoted side now just two points above the drop zone.

Goalkeeper John Ruddy found himself in the spotlight following a mistake which led to a late 2-1 loss at Manchester City last weekend, when Neil's men had been just minutes away from a hard-earned point.

Neil accepts he must be ruthless in team selection to find the right combination for the battles ahead, with matches against Chelsea and Arsenal to come following the international break.

"Every player's place is under threat

If they are not performing as well as I think they should be then obviously questions are going to be asked and whether they should continue," Neil said at a press conference.

"John is no different just because he is a goalkeeper

It is something you always consider.

"The one thing I would say is that John hasn't made a great deal of errors since I have been here.

"To be fair he has been relatively solid and steady so to lay the blame just at his door is unfair."

Neil will be forced into at least a couple of changes against the Swans.

Captain Russell Martin serves a suspension following the defender's red card against City for deliberate handball after Ruddy's gaff which resulted in a penalty to the hosts, coolly converted by Yaya Toure to keep them top of the table.

Matt Jarvis is also unavailable after the winger, on loan from West Ham, suffered knee ligament problems in the first half at the Etihad Stadium.

"Matt has just opened up his knee a little bit so unfortunately he is going to be missing for a wee bit," Neil added.

"We have to make do without him; more weeks than months, several weeks, it is disappointing because he has had such a good impact since coming in, but we just need to get on with it."

After collecting seven points from the first five matches, Norwich have now not won in the last six league outings.

Neil knows that statistic has to be addressed, and fast.

"Playing philosophy and how you want to go about it is all fine and well, but winning games is the most important thing

It is about making sure we get those points on the board and we need to find a way of doing that," he added on Norwich City TV.

"I have got the flexibility in terms of players

Systems don't mean a great deal to me, I am happy to fluctuate from one system to the next.

"It's maybe something we're going to have to alter to a certain extent to get the best in terms of points over performances."

Neil, 34, was a team-mate of Swansea boss Garry Monk when they played together at Barnsley.

"It was a long time ago now, but I know Gaz well

I had a chat with him on a couple of occasions last year regarding players," said the Scot, who took over at Carrow Road last January having been a success with Hamilton in Scotland.

"He has done fantastically well, but they are going through a sticky spell as well at the moment, so it will be two teams desperate to get points on the board."