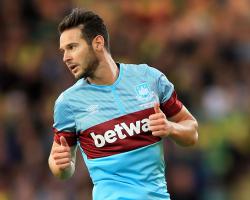 The winger, 29, joined West Ham from Wolves for ÃÂ£10.75million under previous manager Sam Allardyce in 2012 but has had few first-team opportunities, particularly over the past 12 months.

The recruitment of Diego Payet and, earlier on Tuesday, Victor Moses on loan from Chelsea were likely to further limit his competitive playing time under new manager Slaven Bilic.

At recently promoted Norwich, Jarvis, who represented England under Fabio Capello in 2011 in a friendly against Ghana, will compete with Nathan Redmond, Wes Hoolahan, Robbie Brady and more for selection.